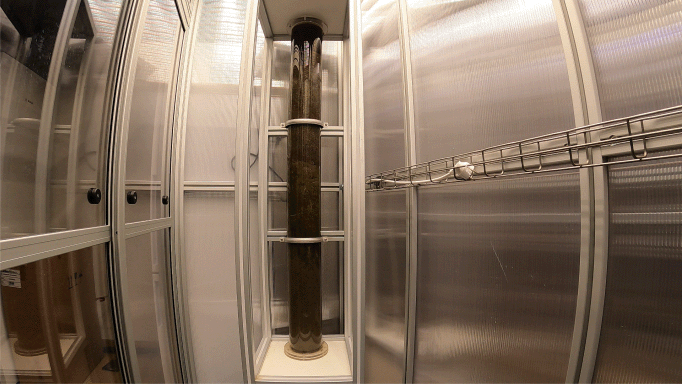 During UNLOCKtober, we unlock the power of microbes. To create awareness and share knowledge on microbes to the general public, visualization is key. A Winogradsky column – a kind of “microzoo” – is a powerful way to do so. This blogpost describes the construction of a column by colleagues from the department of Environmental Technology (Wageningen University), to visualize the removal of groundwater pollutants by microbes in the Griftpark.

The Griftpark: A polluted location

The Griftpark is a historically polluted location in Utrecht, the Netherlands. The pollution responds to the former presence of three gas plants which were operated in this area until the 70s [1]. As a result, the subsoil is contaminated with Non-Aqueous Phase Liquids (NAPLs). These pollutants are heterogeneously distributed in the subsurface, with a chance to pollute groundwater that is used for drinking-water production. Fortunately, the two existing aquifers are separated by a clay layer, preventing pollution to leach from the first (shallow) aquifer to the second (deep) aquifer.

As a first instance to control pollution, at the end of the 90s, the first aquifer was isolated by the construction of a cement bentonite wall. Next to that, pump and treat was applied, mobilizing the excess precipitation to a waste water treatment plant (WWTP) outside the park. As pump and treat will be everlasting, a more cost-efficient approach is necessary. In this context, the BestParc project involved a consortium of researchers from Wageningen University, University Utrecht and Deltares to propose on-site nature-based-solutions (NBS) for the remediation of the NAPLs.

One of the challenges on the application of NBS in a groundwater polluted site is how to visualize a complex process in a straightforward way to the general public. The citizens perception and support plays an important role in acceptation of such innovative concepts. In order to create awareness and share knowledge to the general public about the relevance of NBS, a transparent, concise communication is developed by storytelling combined with a visual abstraction of microbial processes.

A Winogradsky column, where different soil layers are colonized by different types of bacteria, is a powerful way to facilitate the visualization of the underground. The column forms a microcosm that models different microbial systems in a closed environment, in which some gas exchange is allowed. In this way, it can be used to observe biogeochemical processes and distribution of microbial communities in the underground [2]. This type of column has been already be used to try to make microbial communities visible to the naked eye, for instance, in the microbiology museum Micropia in Amsterdam.

After the column assembly, different zones can gradually become visible with time. Ideally, different coloured layers can be observed, which correspond to different applied environmental conditions that create diverse niches for the enrichment of specific bacteria. The appearance of colour and mottle formations facilitate describing the role of microorganisms in nutrient cycling [3]. To further facilitate the visualization of these gradients, different zones can be promoted by the use of materials supplying diverse electron acceptors in the column, resulting in a contrast between anaerobic conditions in the bottom and aerobic conditions in the top of the column. In addition, the different zones represent the gradients present in the subsurface, where mainly organic carbon and nutrients come from the surface and percolate to the underground. In the Griftpark, for instance, the organic carbon originates from the aforementioned contaminants.

Visualizing the Griftpark situation in a column

In the past, quite some media attention was given to “special Griftpark bacteria”, being responsible for the biodegradation of contaminants. This basic description allowed the concept of biodegradation to be communicated as a simplified version of what actually occurs in the ground [4]. Currently, we – Department of Environmental Biotechnology – aim to emphasize how the unique environment of the Griftpark resulted not only in unique bacteria, as isolated organisms, but in a unique underground microbiome which includes the microorganisms as well as their activity. We believe that a Winogradsky column provides a powerful way to do so, as the development of a unique microbiome in the Griftpark can be compared to what occurs in the column, including different depths and therefore, different redox conditions. Such display can represent how the Griftpark’s microbiome plays a key role in the natural removal of the dissolved contaminants in the groundwater.

Therefore, we conducted a first Winogradsky column with similar sediments to the ones existing in the Griftpark. A recipe is included below. In the future, such a column can be elaborated with actual Griftpark sediments. Moreover, the Griftpark’s microbiome may also be stimulated by the addition of specific electron acceptors and/or specific degrading bacteria to enhance biodegradation processes. Our goal is that the visualization of microbial processes involved in contaminants biodegradation helps to create trust around NBS. In our opinion, this trust is key before the implementation of NBS.

Below, we include a summary on how the Winogradsky column from the Department of Environmental Technology was built. You can watch the first three months of the timelapse above!

It should be mentioned that we got inspired by visiting and discussing with key players in Scientific Communication, in this case Micropia – Artis (click here for Micropia’s recipe). 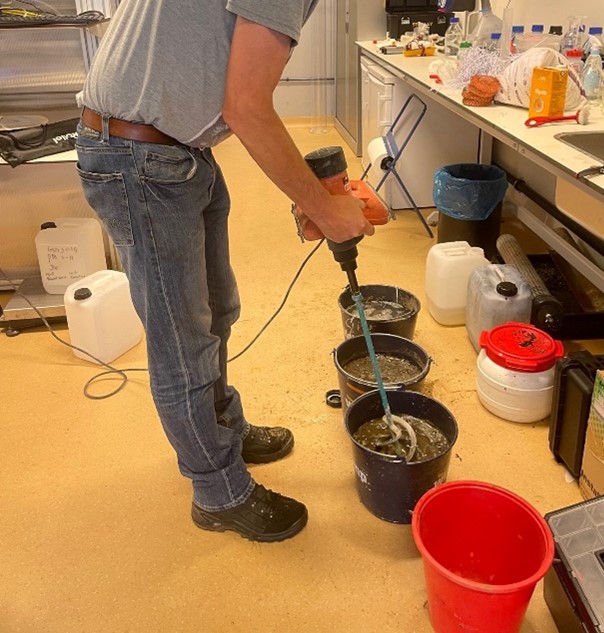 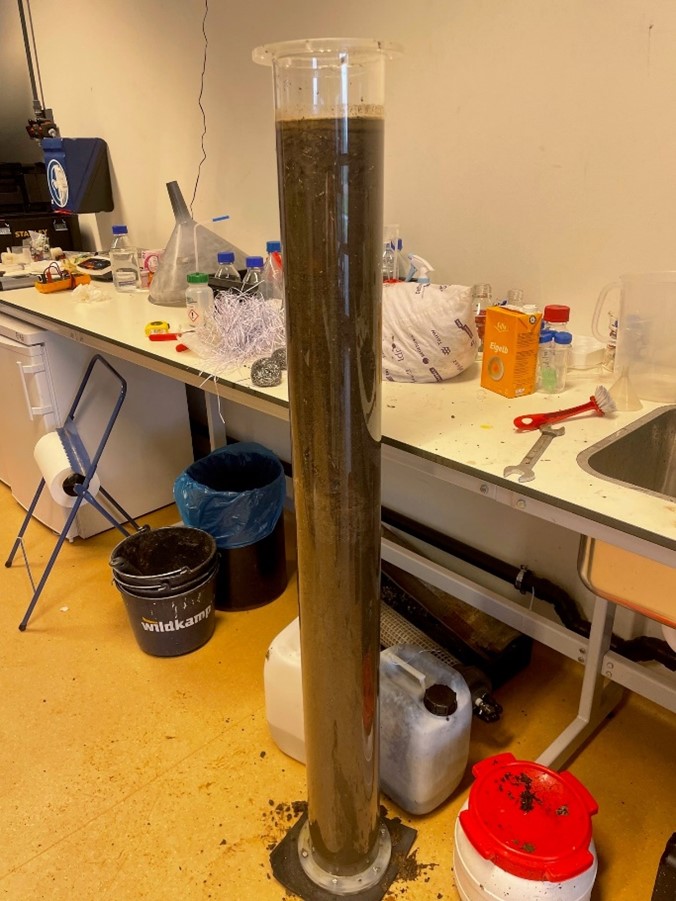 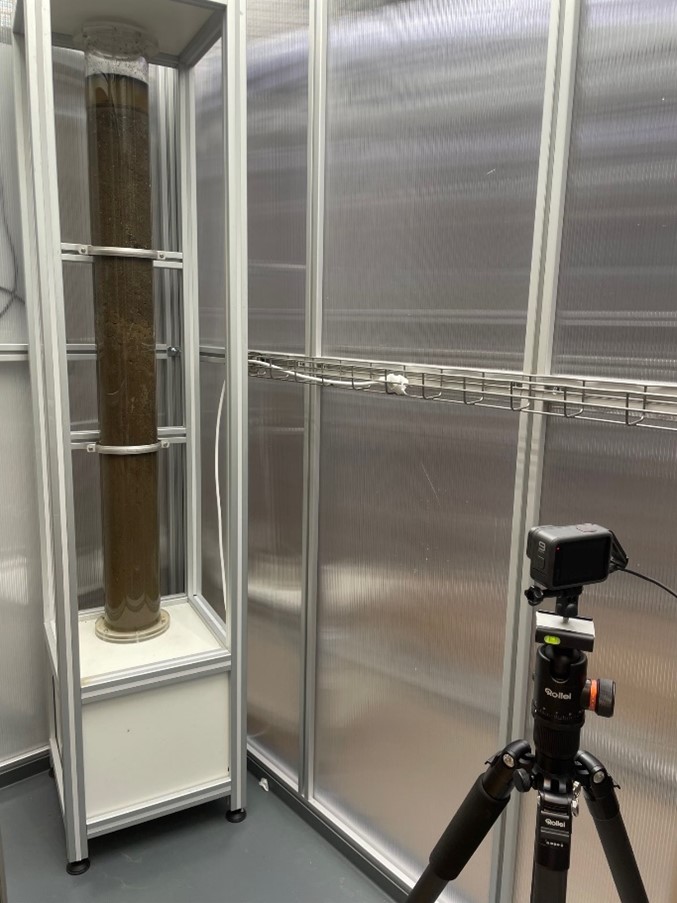