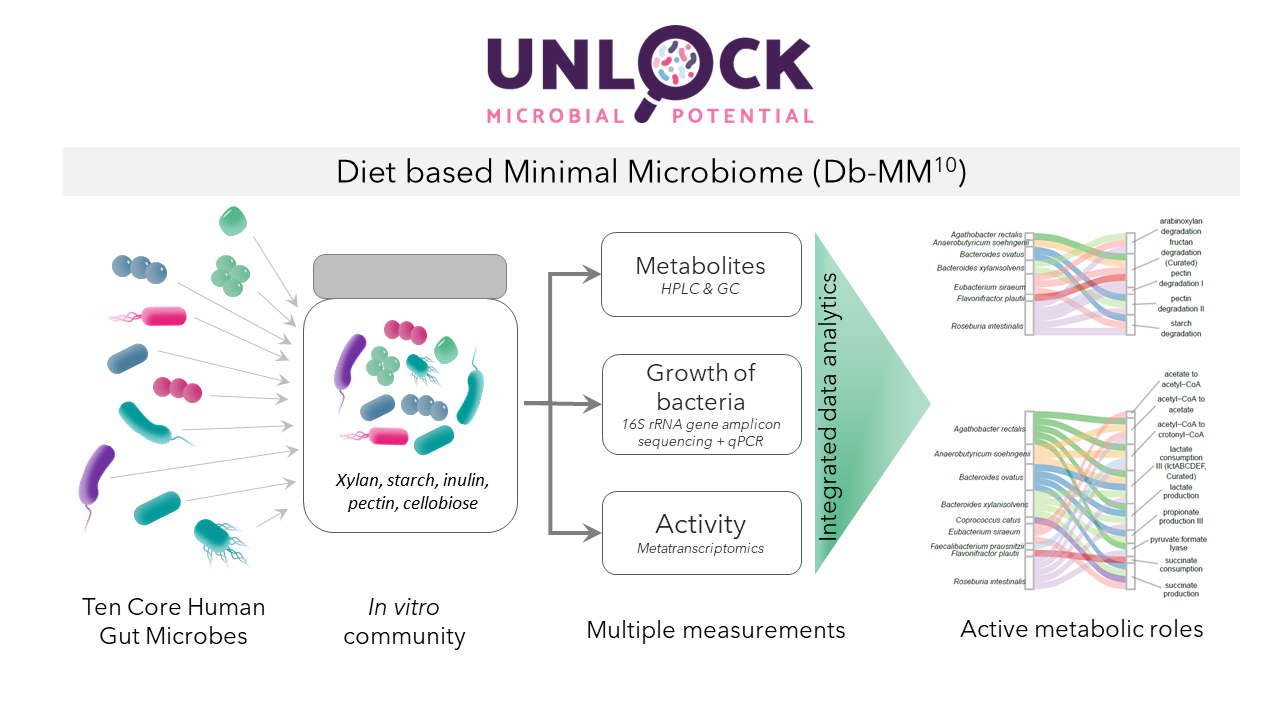 The mission of UNLOCK is to unlock microbial potential by looking at whole microbial communities, instead of single species. These communities, however, can be very complex and challenging to investigate. A way to tackle this problem, is to use a simplified, synthetic community of only a selection of key microbes. Recently, UNLOCK-scientists – in collaboration with scientists from the NWO Gravitation program SIAM – followed this approach. They composed a synthetic community of ten key microbes from the human intestinal tract. In this article, we discuss their main findings.

In the human intestinal tract, dietary fibers that cannot digested by human enzymes are left to the intestinal microbiota residing in the large intestine. Here, the fibers are degraded by a community of microbes, which produce compounds (e.g.  simple sugars and short-chain fatty acids) which can be used by other bacteria or human intestinal cells. The interactions between these bacteria is, however, rather complex. Some species co-operate and exchange compounds (called “cross-feeding”), whereas others compete for the same fibers. The latter does not mean that these species cannot live together in the human intestinal tract. Instead, these species have found a way to co-exist, but how they do this exactly remains obscure.

In any case, this mystery cannot be solved by looking at single species or pairs of species only. Clearly, there’s a need to study bacterial species in the context of their community. In a recent study by (former) UNLOCK-scientists, a community of key bacterial species of the human intestinal tract were put together, to unravel their interactions in an environment resembling the human large intestine.

How to design a minimal synthetic community

The researchers started by looking at fibers that commonly end up in the large intestine of a Western person. These include pectin, xylan, starch, inulin and cellobiose. Next, they selected bacterial species found in the majority of the Western population (e.g. based on previous studies from countries in Europe and North America). Based on the available information on the bacteria or their genomes, species were selected that at least a) were able to degrade one or more of the selected fibers b) were able to consume the simpler sugars that are released after degradation of these fibers or c) were able to use the fermentation products – mainly short-chain fatty acids – formed after degradation of these fibers by other species. Additionally, they made sure that for each fiber, at least two bacterial species were able to compete for it. Finally, the researchers did not want to select only the most abundant and well-studied species, so decided to also include species that only occur in small amounts in Western individuals or had not been investigated yet before. In total, they selected ten strains which together should be able to carry out at least 71.7% of the key functions reported for the Western human gut microbiome. They named this synthetic community the Diet-based Minimal Microbiome.

From single members to a whole community

First, each bacterial species was grown individually on a mix of the selected fibers. Some of the species grew really well, whereas others failed to grow independently or only if acetate – normally a short-chain fatty acid produced by other species – was added to the growth medium. Next, the ten strains were combined for 96 hours. The presence of each species was monitored, as well as the compounds they produced. This time, the five species that failed to grow independently, were able to grow, indicating co-operation between the ten members of the community.

Monitoring the activity of the community

Finally, the scientists monitored the activity of the community by looking at the genes switched on and off at different timepoints during co-culturing. A specific focus was laid on the genes known to be involved in the degradation of the selected fibers and the production of short-chain fatty acids. This did not only reveal novel interactions between species that were previously unidentified, but also uncover behaviors of particular bacterial species, which had not been discovered before.

This study nicely demonstrates how simplified or minimal synthetic communities can be applied to study the interactions between key bacterial species of – in this case – the human intestinal tract. It should be noted that some of the species can be replaced by similar species fulfilling the same criteria and that the chosen combination of ten species is not fixed. Overall, the study provides a powerful example of how microbial communities can be applied to unlock microbial potential.

If you want to read the full publication, including more detailed information on the bacterial strains and their characteristics, click the link below.

The work described exemplifies the research done at our Biodiscovery Platform.

This study was funded by UNLOCK and the Soehngen Institute of Anaerobic Microbiology (SIAM), and carried out at the Laboratory of Microbiology at Wageningen University & Research.